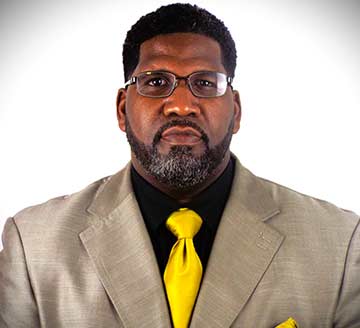 Dr. Adrian E. Wideman was born and raised in Cokesbury, South Carolina (Greenwood County) and is a 1996 graduate of Greenwood High School. Dr. Wideman accepted a full athletic scholarship to Hampton (Va.) University and graduated with his Bachelor's in Broadcast Journalism in 2000. After leaving Hampton, Dr. Wideman played three years in the AFL (Arena Football League) before retiring in 2004.

Dr. Wideman returned to South Carolina and began working in the Greenville County School District as Dean of Students and football coach at Carolina High School. He currently is an Instructional Facilitator for the school district at the High School Alternative Program.

November 22, 2007, Dr. Wideman was licensed to preach the Gospel under the esteemed leadership of Dr. Phillip M. Baldwin of the Bethlehem Baptist Church, Simpsonville, SC. Dr. Wideman received his Masters of Christian Ministry (MCM) from North Greenville (SC) University Seminary in 2014 and his Doctorate in Ministry (DMin) in 2018.

September 4, 2011, Dr. Wideman was called to pastor Mt. Olive Baptist Church, Saluda, SC where the church grew through the guidance of the Holy Spirit. Under his pastoral leadership, Mt. Olive completed its paving of their parking lot, added three new choirs, a Minister of Music, a Young Adult Sunday School Class, a church website, a radio ministry, a church nursery and many other blessings from God.

Dr. Wideman is married to the former Ms. Tonia Threatt and they have two children, Lailah Annette and Donovan James. His daily prayer is that others will never be able to see him, but see and feel that God is in him.