Upon this rock I will build my church and the gates of Hell shall not prevail against it. 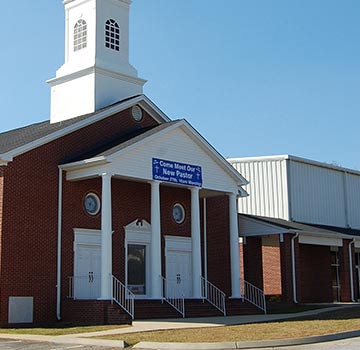 On this present location this scripture was fulfilled back in the spring of 1895 when there was a need to serve God. The late A.D. Sweeney founded the first church. A log schoolhouse was built and the first revival was held with 15 members being baptized. There were no officers so some deacons were borrowed from neighboring church, Reedy Fork.

The Reverend Carl Evans was the first pastor. The first revival was so successful that the next year there was another one and 10 more members were baptized. Sister Pellar Abercrombie Sweeney was one of the first members along with Sister Texas Griggs. She departed this life in March 1987.

The original church was destroyed by fire in 1911. Another one was erected with timber donated by Mr. William Henry Cox. John Richardson furnished the sawmill and labor. All of the members gave their services freely. The early church strived and grew under the dedicated leadership of several consciences members. There was only one choir at first. Simon Jenkins, Essie Ford, Inez Burton, Mamie Sweeney, A.D Sweeney, Brother Buster and Todd Thurman were just a few of pioneer choir members.

The Deacon Board has always been one of the pillars of the church. Some of the early chairmen of the Deacon Board were A.D. Sweeney, John Jenkins, Ira Davis and Frank Logan. In 1930 Willie H. Sullivan, Sr was elected and he served in that capacity for the next 33 years. The chairman's helm was passed on to Paul Sweeney in 1963. In 1970, Cornell Sweeney, Sr. was elected chairman and he served in that position until God called him to his heavenly home in 2010. Without the accurate keeping of the next group of men, our history would have been lost forever. The first church officers were as follows: 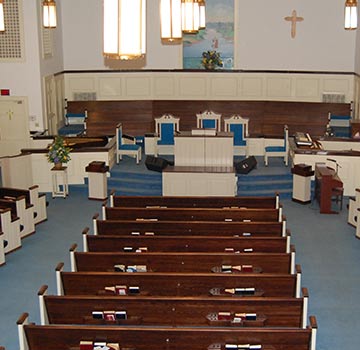 Reverend J.A Patterson served as pastor from 1953-1954. Reverend D. B Walker came from Anderson and served from 1954-1970. During this tenure, the Gospel Choir was formed, the 2nd Sunday service was added, and the church experienced more remodeling. An educational wing was added and the baptismal pool was moved to the inside of the church. Reverend Patterson served us well until 1970. For one year we were without a pastor.

It was frustrating year, but church families clung together in prayer. After much joint praying and hoping, the Lord answered our prayers and sent us a very young, dedicated, dynamic Christian hearted young minister, Reverend W.R Davis. Under his leadership, church services expanded from bi-weekly services to weekly services. The following choirs were formed: young adults, mixed, all choirs were formed Young Adults, Mixed, All Male, and Junior- other organizations formed were Trustees Board, Nurses Guild, Deaconess and Ushers.

In 2005, Rocky Creek Missionary Baptist Church agreed with a membership vote to build a life center for our church. The groundbreaking ceremony was held on November 6th, 2005 after morning church service. The members that participated in the ceremony were Trustee Anthony Harris, Chairman of the Building Committee; Mr. Horace Jenkins, one of the church's oldest members; Sis Lillian Hewens, Vice Chairman of the Building Committee; Rev. Dr. W.R. Davis, Pastor of Rocky Creek; and the late Deacon Cornell Sweeney Sr, Chairman of the Deacon Board. Deaconess Carrie Sweeney gave the history of the church. The life center was completed in 2007. On December 2, 2007, there was a dedication program held at the Church.

A very able body of officers is now serving the present church. They include the Deacon Board, which is made up of ____ men with Deacon Milford Logan serving as the Chairman and Robert Smith as the Vice Chairman. The Trustees Ministry with _____ members and Ulysses Sweeney serving as President and __________ as Vice President. With such a strong history to build on, we are hoping to do many aspiring things in the future to expand our ministry.